Difference between revisions of "Tessellation"

Tessellation is the Vertex Processing stage in the OpenGL rendering pipeline where patches of vertex data are subdivided into smaller Primitives. This process is governed by two shader stages and a fixed-function stage.

Note: This describes the OpenGL 4.0 feature, not the old gluTess* tessellation functionality.

The tessellation process is divided into three stages which form an optional part of Vertex Processing in the rendering pipeline. Two of the stages are programmable; between them is a fixed function stage. They are described below, in the order they are processed.

Generally, the process of tessellation involves subdividing a patch of some type, then computing new vertex values (position, color, texture coordinates, etc) for each of the vertices generated by this process. Each stage of the tessellation pipeline performs part of this process.

The Tessellation Control Shader (TCS) determines how much tessellation to do (it can also adjust the actual patch data, as well as feed additional patch data to later stages). Therefore, the TCS is primarily responsible for ensuring continuity across patches. So if you have two patches that need to have different levels of tessellation, the TCS invocations for the different patches need to use the proper tessellation controls to ensure that the interface between the patches uses the same amount of tessellation. Without this protection, gaps and breaks in what are supposed to be contiguous patches can occur.

The TCS is optional; default tessellation values can be used if no TCS is provided.

The tessellation primitive generator takes the input patch and subdivides it based on values computed by the TCS or provided as defaults.

The Tessellation Evaluation Shader (TES) takes the tessellated patch and computes the vertex values for each generated vertex.

Tessellation stages operate on patches, a primitive type denoted by the constant GL_PATCHES. A patch primitive is a general-purpose primitive, where every n​ vertices is a new patch primitive. The number of vertices per patch can be defined on the application-level using:

with GL_PATCH_VERTICES as target and a value which has is on the half-open range [1, GL_MAX_PATCH_VERTICES). The maximum number of patch vertices is implementation-dependent, but will never be less than 3.

The first step of tessellation is the optional invocation of a tessellation control shader (TCS). The TCS has two jobs:

The TCS can change the size of a patch, adding more vertices per-patch or providing fewer. However, a TCS cannot discard a patch (directly; it can do so indirectly), nor can it write multiple patches. Therefore, for each patch provided by the application, one patch will be provided to the next tessellation stage.

The TCS is optional. If no TCS is active in the current program or program pipeline, then the patch data is passed directly from the Vertex Shader invocations to the tessellation primitive generation step. The amount of tessellation done in this case is taken from default values set into the context. These are defined by the following function:

Because of this dichotomy, the primitive generator operates on what could be considered an "abstract patch". It doesn't look at the patch output from the TCS; it thinks only in terms of tessellating an abstract quad, triangle, or "isoline" block.

Depending on the abstract patch type, the primitive generator evaluates a different number of tessellation levels and applies different tessellation algorithms. Each generated vertex has a normalized position (i.e. the coordinates are on the range [0, 1]) within the abstract patch. This position has two or three components, depending on the type of the patch. The coordinates are provided to the TES via the built-in in vec3 gl_TessCoord input.

Not all abstract patches use the same number of values in the outer/inner tessellation levels data. For example, triangles only uses one inner level and 3 outer levels. The rest are ignored.

The patch can be discarded if any outer tessellation level that is used by the abstract patch type is 0 or less. It can also be discarded if it is a floating-point NaN. A patch that is discarded does not get tessellated, and no TES is invoked for it. It is simply swallowed by the system as though it never were.

This allows a TCS to effectively cull patches by passing 0 for a relevant outer tessellation level.

In the below discussion, max​ is the maximum allowed tessellation level, as defined by the GL_MAX_TESS_GEN_LEVEL. It must be at least 64, so you have some room to play with.

The spacing affects the effective tessellation level as follows:

At various points in the forthcoming discussion about tessellating the abstract patch, there will be statements that say to tessellate an edge of some primitive. This means to subdivide it into a series of segments according to some tessellation level. The total length of these segments is the length of the original segment. However, the length of individual segments depends on the spacing parameter specified in the TES.

Given an effective tessellation level, denoted by n​, which applies to that edge, the vertices for an edge tessellated by n​ is defined as:

equal_spacing
The edge is divided into n​ segments. All segments will have equal length.
fractional_even_spacing, fractional_odd_spacing
If n​ is 1, then no subdivision occurs. Otherwise, the edge will be divided into n​ - 2 segments of equal length. There will also be 2 segments that have length equal to each other, but not necessarily to the first group. The length of these 2 segments, relative to the others, will be n​ - f​, where f​ is the effective tessellation level value after clamping but before being rounded up.
When n​ == f​, the length of the 2 segments will be equal to the length of the other segments. As n​ - f​ approaches 2.0, the relative length of the 2 segments approaches 0.0.
The exact location of the 2 shorter segments is not defined, but they should be placed symmetrically, on opposite sides of the subdivided edge. Also, the location must be invariant with the same f​ value (thus allowing tessellated edges to work together).

Each vertex generated and sent to the TES will be provided Barycentric coordinates as the gl_TessCoord input. This defines where this vertex is located within the abstract triangle. With this coordinate, it is possible to multiply any vertex attribute from 3 vertices to compute the appropriate value from the tessellation unit.

The abstract patch of a quad is a rectangle, naturally. All 4 outer and 2 inner tessellation levels are used.

Each vertex generated and sent to the TES will be provided a normalized 2D coordinate as the gl_TessCoord input, representing the location of that vertex within the abstract patch. 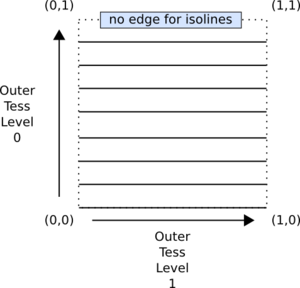 The rectangular abstract isolines patch represents a series of horizontal lines, as shown to the right. The first outer tessellation level defines how many lines are in the patch, and the second defines how many segments the lines are divided into. So if you want to tessellate a single line, you should pass 1 for gl_TessLevelOuter[0]. However, if you need more line tessellation than can be done in a single outer level value, the TES is perfectly capable of stitching multiple separate lines together. Remember: the abstract patch is abstract; the TES can position the vertices wherever it wants.

Each vertex generated and sent to the TES will be provided a normalized 2D coordinate as the gl_TessCoord input. The y component specifies which line (normalized to the half-open range [0, 1) ) is being generated. The x component defines how far along that line this vertex should be generated for.

The Tessellation Evaluation Shader (TES) is responsible for taking the abstract coordinates generated by the primitive generator, along with the outputs from the TCS (or vertex shader, if no TCS is used), and using them to compute the actual values for the vertices. This is where you code the algorithm that you actually use to compute the new positions/normal/texcoords/etc. The TES is a mandatory part of tessellation; if one is not present, then tessellation doesn't happen.

The TES is rather like a vertex shader, in that each invocation operates on a distinct vertex within the tessellated patch (though, as with a vertex shader, the system may call the TES more than once for the same vertex, so it should be deterministic). Also, the TES cannot cull vertices.