Note that this also means that we don't need the viewport settings. We only need the depth range.

The trick to this method is what follows: how we go from Pz to the full eye-space position. To understand how this works, here's a quick bit of geometry: 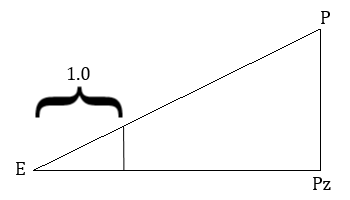 The E in the diagram represents the eye position, which is the origin. P is the position we want, and Pz is what we have. So, what do we need to get P from Pz? What we need is a vector direction that points towards P, but has a z component of 1.0. With that, we just multiply that vector by Pz; the result will necessarily be P.