A Cubemap Texture is a texture, where each mipmap level consists of six 2D images which must be square. The 6 images represent the faces of a cube. The texture coordinate used to access a cubemap is a 3D direction vector which represents a direction from the center of the cube to the value to be accessed.

Cubemaps can have multiple mipmap levels.

Cubemaps are a texture type, using the type GL_TEXTURE_CUBE_MAP. They are similar to 2D textures in that they have two dimensions. However, each mipmap level has 6 faces, with each face having the same size as the other faces. The width and height of a cubemap must be the same (ie: cubemaps are squares), but these sizes need not be powers of two.

If OpenGL 4.3 or ARB_texture_storage is available, then immutable storage for a cubemap texture can be allocated with glTexStorage2D.

Cubemaps may have mipmaps, but each face must have the same number of mipmaps. Cubemaps can use any of the filtering modes and other texture parameters.

Uploading pixel data for cubemaps is somewhat complicated. If OpenGL 4.5 or ARB_direct_state_access is available, then glTexSubImage3D can be used to upload face data for a particular mipmap level. The third dimension values (zoffset) for glTexSubImage3D represents which face(s) to upload data to. The faces are indexed in the following order:

Understanding the orientation of a cubemap is very important, and it can be somewhat unusual due to differences with traditional OpenGL orderings. The following diagram shows how each face in the cubemap is oriented relative to the cube being defined. 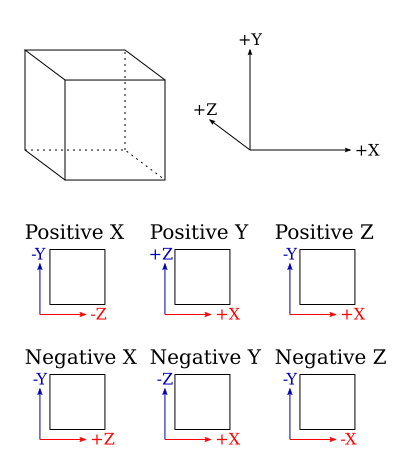 Note that the coordinate system for cubemaps is left-handed. If X is forward, and Y is up, then Z is to the left. The axis labels on the 6 face diagrams shows the direction that the given face will be oriented in cubemap space. So the positive Y axis face (the top of the cube, in our example) as the local V coordinate of the texture map going towards positive Z.

Let's say that +Z is forward, and +Y is up, so +X to the right. Given that orientation, the texture coordinates of the 6 faces of the cube look like this:

Intuitively, you can think of it as standing in the center of the cube and turning in place. The four faces in the X/Z plane are oriented as if you're rotating clockwise around the Y axis. The meaning of the Y axis never changes, but right/left is rotating around with you. For the top and bottom faces, it's like facing along the +Z axis and craning your head up and down. The meaning of the X axis doesn't change; it's always to the right. But if you're looking up, the direction that meant "up" now means "backwards"; if you're looking down, the direction that used to mean "down" now points forwards.

And of course V is flipped in all cases, because OpenGL uses a bottom-left coordinate system for its textures. So the diagram makes more sense if you mentally flip the V coordinate in the diagrams.

The texture coordinates for cubemaps are 3D vector directions. These are conceptually directions from the center of the cube to the texel you want to appear. The vectors do not have to be normalized.

Cubemaps can be bound to framebuffer objects for layered rendering. The 6 faces are given a specific order:

Under the standard filtering rules for cubemaps, filtering does not work across faces of the cubemap. This results in a seam across the faces of a cubemap. This was a hardware limitation in the past, but modern hardware is capable of interpolating across a cube face boundary.

Array textures can also come in cubemap flavors, in addition to 1D and 2D. They use the texture type GL_TEXTURE_CUBE_MAP_ARRAY.

The order of the faces within a layer is the standard order:

Every OpenGL API call that operates on cubemap array textures takes layer-faces, not array layers. For example, when you allocate storage for the texture, you would use glTexStorage3D or glTexImage3D or similar. However, the depth​ parameter will be the number of layer-faces, not layers. So it must be divisible by 6.

Similarly, when uploading texel data to the cubemap array, the parameters that represent the Z component are layer-faces. So if you want to upload to just the positive Z face of the second layer in the array, you would use call glTexSubImage3D, with the zoffset​​ parameter set to 10 (layer 1 * 6 faces per layer + face index 4), and the depth​ set to 1 (because you're only uploading one layer-face).

Cubemap arrays can have mipmaps. They are uploaded in the same way as for other kinds of array textures. Remember that the number of layer-faces does not change for mipmaps.

The sampler type for cubemap arrays is gsamplerCubeArray. gsamplerCubeArrayShadow can be used for comparison lookups. The texture coordinates are 4D values; the first three values are the vector direction, and the fourth value is the layer to use. Note that this is the actual layer to use, not the layer-face.