Codeplay announces SPIR-V support for ComputeCpp in v0.3.0. This beta implementation of SPIR-V for OpenCL support means that developers can use SYCL and ComputeCpp to develop for any OpenCL hardware that includes a driver that consumes SPIR-V.

Only a few days after the 1.35.x release, GPU Caps Viewer 1.36.x has been released with support for OpenGL 4.6. OpenGL 4.6 introduces the support of SPIR-V modules in OpenGL and the set of SPIR-V extensions is listed exposed in the OpenGL panel. There are a few Vulkan improvements as well in this version. GPU Caps Viewer is a graphics card information utility focused on the OpenGL, Vulkan, OpenCL and CUDA API level support of the main (primary) graphics card.

The Khronos Group announces the immediate availability of the finalized OpenCL™ 2.2 specification, incorporating industry feedback received from developers during the provisional specification review period. In addition to releasing the specification in final form, Khronos has, for the first time, released the full source of the specifications and conformance tests for OpenCL 2.2 onto GitHub to enable deeper community engagement. The conformance tests for OpenCL versions 1.2, 2.0 and 2.1 have also been released on GitHub with more open-source releases to follow. The Windsor Testing Framework, also released today, enables developers to quickly install and configure the OpenCL Conformance Test Suite on their own systems. Developers who know OpenCL C and plan to port their kernels to OpenCL C++, the OpenCL C to OpenCL C++ Porting Guidelines have been released.

Use Glslang to Translate HLSL Shaders to SPIR-V

Many applications porting to Vulkan also need a way to port their HLSL shaders to SPIR-V. Glslang provides a method to translate HLSL shaders to SPIR-V, which is now available and ready to use. Currently the HLSL mode of the glslang frontend is complete enough to run complex, real-world workloads such as Dota 2 and Ashes of the Singularity. It accepts shaders for any shader stage, and handles common language constructs for functions, control flow, variable and type declarations, registers and pack offsets, most DX10 and later texture methods, most intrinsic functions, most preprocessor functionality, most built-in semantics, and attributes that affect stage functionality. To learn more about the HLSL to SPIR-V translator, visit this FAQ at the glslang GitHub.

• Creating the fastest math libraries for Ruby by using the GPU through OpenCL and ArrayFire. (OpenCL)

• HPXCL – Asynchronous Integration of CUDA and OpenCL to HPX (OpenCL)

Although this backend is still a work in progress, many core features are implemented, allowing real OpenCL applications to be run. This backend allows us to run SPIR-based applications on NVIDIA devices, such as SYCL codes compiled with Codeplay’s ComputeCpp compiler.

Phoronix had a call with The Khronos Group president Neil Trevett to discuss some of their latest initiatives and the ongoing advancements to the Vulkan API, WebGL, SPIR-V, and more. Read about some of the highlights.

Join the Khronos Group at the Marriott Pinnacle Downtown in Vancouver, BC for a full-day workshop on Vulkan. We will briefly cover the basics, then dive into the details you need. Planned topics include:

• vktrace for desktop and Android

• SPIR-V Tools (GLSLang, SPIR2CROSS, and others)

• Keeping your GPU fed without getting bitten

• Vulkan Tutorial - We’ll get into some code!

• Vulkan game development on Android - a case study from Samsung

• Panel/Q&A with ISVs, IHVs, and Presenters: Performance recommendations, practical advice, and answers to your questions 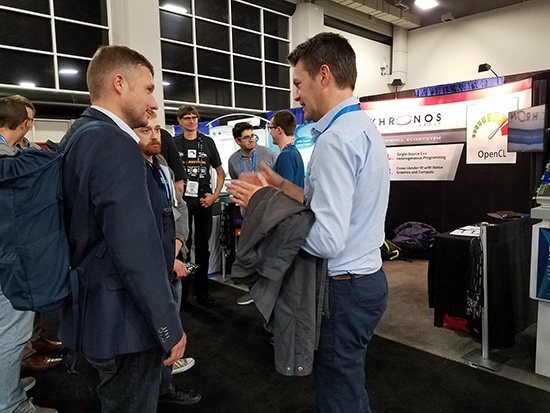 Early Access to the SYCL Open Standard for C++ Acceleration

Codeplay is giving developers free, early access to ComputeCpp with a pre-conformance beta implementation of the SYCL open standard, along with an open-source preview of the latest Parallel Technical Specification to be adopted into C++17. Other open-source projects being made available are VisionCpp, a machine vision library demonstrating C++ techniques for performance-portability, and an early version of the Eigen C++ library that uses SYCL for acceleration on OpenCL devices.

The Khronos Group has posted video from all of the Khronos BOFs on Youtube. The following video and all the matching presentations are now ready to view:

ARM presents the Mali Graphics Week. A Vulkan meetup in Cambridge will be presented Friday April 22 2016. Already online: Get started with the new ARM Vulkan SDK v1.0.0 for Android!, SPIRV-Cross, working with SPIR-V in your app, GDC Vulkan presentation slides and finally ARM and Epic Games talk Vulkan live stream. Visit the Mali Graphics Week page for a complete schedule of what’s in store this week.

The Khronos Group, an open consortium of leading hardware and software companies, announces the immediate availability of the OpenCL™ 2.2, SYCL™ 2.2 and SPIR-V™ 1.1 provisional specifications. OpenCL 2.2 incorporates the OpenCL C++ kernel language for significantly enhanced parallel programming productivity. SYCL 2.2 enables host and device code to be contained in a single source file, while leveraging the full power of OpenCL C++. SPIR-V 1.1 extends the intermediate representation defined by Khronos with native support for shader and compute kernel features to fully support the OpenCL C++ kernel language. These new specifications can be found at www.khronos.org and are released in provisional form to enable developers and implementers to provide feedback before finalization, including at the Khronos forums.

An Ada 2012 library that implements the enumerations for the SPIR-V intermediate language. This library can be used to build tools that manipulate SPIR-V in Ada 2012. This library is still being tested and comments, suggestions and bug finding are very welcome on Github.