The Silicon Valley WebGL/WebVR Meetup group held a session at NVIDIA’s GTC18 on Tuesday night. The video for this is now available online.

The Khronos Group is proud to announce that Ben-Gurion University has joined as an academic member. Ben-Gurion University of the Negev is one of Israel’s leading research universities and among the world leaders in many fields. Through its technology transfer company, BGN Technologies, which is also responsible for the University’s patent portfolio, the University initiates, leads and implements projects with institutions, companies and foundations world-wide.

KentBye Voices of VR interviewed Nick Whiting this week at the GDC18 Epic Games booth. Nick is from Khronos member Epic Games and is the OpenXR Working Group Chair. Learn more about OpenXR and watch the OpenXR session from the Khronos Developer Day at GDC.

Introducing the Sketchfab download API: a search bar for the 3D world and glTF

Sketchfab has just announced a download API for their entire 3D catalog. The API lets you search by titles, tags, categories, polygon count and more. The initial scope of the download API lets you import content available under a Creative Common license – more than 150,000 3D models available today – in glTF format. As a step two, the API will also let you easily import your own content, as well as content you purchased on the Sketchfab store. Alongside the release of the download API, Sketchfab introduces import add-ons for Unity, Unreal and Godot, as well as native integrations with Torch3D, Minsight, Spatial stories, Selerio, StellarX, Valorem’s Holobeam, AnimVR, Plattar, Sketchbox3D and Looking Glass.

This years Khronos Developer Day Sessions were the biggest yet, with over 1500 people attending. Most of the sessions were standing room only. Khronos would like to thank the attendees, the speakers, and the support staff who made this day possible. It’s not over yet! On Thursday night there will be a WebGL & glTF Meetup. And, if you were not able to make it to GDC this year, we’ve you covered as well. The presentations are online, video of the sessions will appear online later this week, and we have all your favourite Khronos Standards Merchandise for gals and guys available online.

Imagination Technologies announces a new version of PVRTune, the PowerVR GPU performance analysis tool which provides developers with a deep level of information to help them fully understand the dynamics of their applications on mobile and embedded devices. With this release, PVRTune is now ‘API aware,’ able to retrieve and present events that have been generated by the client driver of native programming interfaces such as OpenGL ES and the EGL. PVRTune today supports OpenGL ES and EGL client drivers, with Vulkan support to follow.

The Khronos Group is proud to announce that the PeakHills Group has joined as an associate Member. The Peakhills group has a focus on custom compiler development services, LLVM optimization services, and software development.

New functionality in Vulkan 1.1 includes Subgroup Operations that enable highly-efficient sharing and manipulation of data between multiple tasks running in parallel on a GPU. Khronos member and guest author Neil Henning (@sheredom), Principal Software Engineer, for Vulkan & SPIR-V at Codeplay Software has written an in-depth tutorial on how to use this new feature. Head on over to the Khronos blog and check out the tutorial. Feedback is welcome.

Vulkan 1.1 CTS has been posted to GitHub

Following last week’s launch of the Vulkan 1.1 specification, the Vulkan 1.1 CTS has been posted to GitHub, and the Khronos Adopter’s program is available to accept conformance submissions.

Khronos was pleased to receive this photo of the 2018 Winter Quarter Vulkan class from Oregon State University, taught by Mike Bailey, Professor, Computer Science. Oregon State U is an Academic Member of the Khronos Group. Best of luck to the entire 2018 Vulkan class! 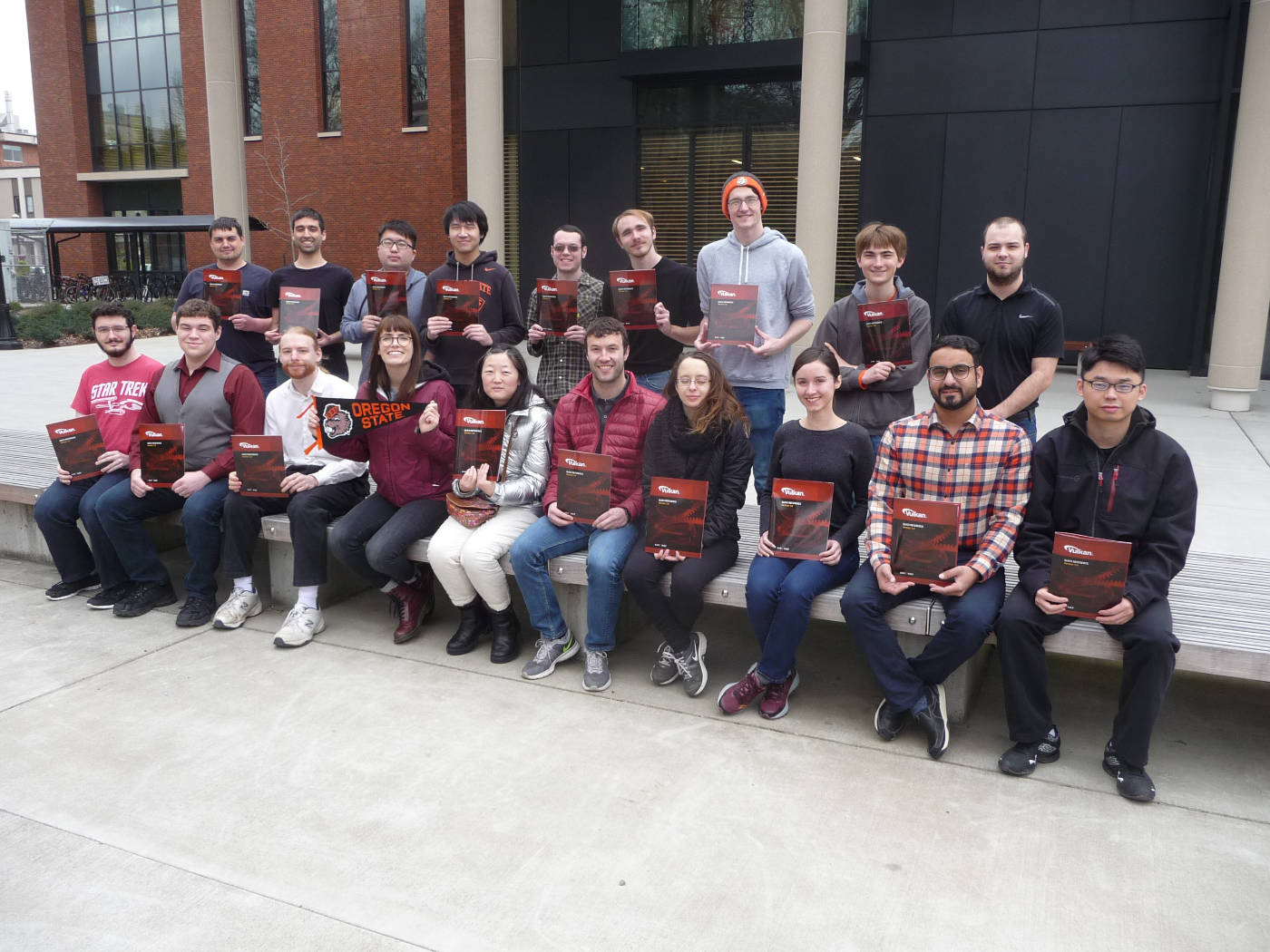 The GSN Composer is an online node-based visual programming environment that allows generating custom nodes using GLSL/WebGL. For every uniform variable that is created within the GLSL shader code editor, an input slot is automatically added to the corresponding shader node, which can be connected to other nodes of the dataflow graph. This makes online shader prototyping very fast and intuitive and frees the developer of writing many lines of support code to fill the GLSL uniform variables with values. The GSN Composer requires no login and is free-of-charge. All that is needed to get started is a web-browser and your creativity. Several simple GLSL examples are provided such that this tool is also suited as starting point for GLSL/WebGL beginners.

The AMD developers working on the official Vulkan Linux driver, AMDVLK, have just uploaded their revised code supporting Vulkan 1.1. With around 13,000 lines of new code, they have enabled Vulkan 1.1 support within their AMDVLK/XGL code-base.

With the release of Vulkan 1.1, you can download NVIDIA’s Vulkan beta driver for Windows and Linux. The Linux driver is version 387.42.05 and supports the new VK_KHR_multiview, VK_KHR_maintenance3, VK_KHR_device_group, and VK_KHR_device_group_creation extensions.

Intel has joined the party with NVIDIA and AMD in offering launch-day Linux driver support for the new Vulkan 1.1 update from The Khronos Group. This ANV Vulkan driver support continues targeting Broadwell “Gen 8” graphics hardware and newer. Learn more about the Intel drivers.