Join the Khronos Group at GDC, where the latest in game development and delivery technology is all anybody will be talking about.

Join us for sessions about WebGL, glTF, OpenXR, and of course Vulkan; and get your free t-shirt, stickers, and Khronos API reference guide.

The Khronos Group is sponsoring this WebGL/WebVR Meetup! Last year we had over 200 RSVPs and an amazing lineup of speakers!

Join Khronos member Patrick Cozzi (Cesium) and other speakers for this gathering of the Silicon Valley WebGL/WebVR meetup.

Patrick Cozzi (Cesium): will be presenting on some cool stuff he’s been working on around using WebGL with autonomous driving vehicles.

James Baicoianu: JanusVR James and his team at JanusVR have been doing some cool stuff with WebGL, "re-imagining web pages as collaborative 3D webspaces connected by portals." They have also developed their own markup language "JML". James will be talking about how they use Web Components to build JanusWeb. He'll also show us how to build some basic interactive WebVR components like buttons, sliders, etc and how to link those building blocks together to make a custom WebVR experience.

Isaac Cohen (aka Cabibo): Isaac will be showing off some of his latest amazing WebGL accomplishments.

Alban Denoyel (SketchFab): not sure if you guys have noticed but SketchFab is killing it these days!
Alban will be demonstrating some of the features in the latest release of SketchFab. It's pretty cool!

Join us at our VRDC table to speak with OpenXR members about the latest in the development of OpenXR, the open and royalty-free cross-platform standard for VR and AR applications and devices. 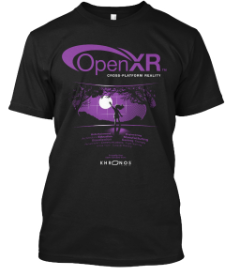 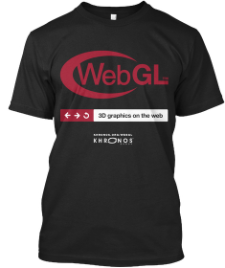 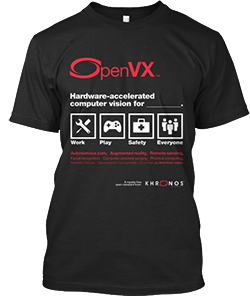 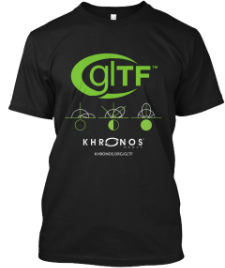 Get your free Khronos T-Shirts!

Flaunt your Standards-allegiance at GDC with a free Khronos T-Shirt! We will have shirts in a range of sizes available for you, whether you are using Vulkan, WebGL, glTF, or OpenXR. And look for the new Vulkan shirt design! If you can't make it to GDC this year, we’ve got you covered: Buy a t-shirt online!

Got a Khronos shirt already? Old or new. Wear it, take a pic, and post it on Twitter with hashtag #khronosphoto and it might just show up on khronos.org

Not coming to GDC? We've got you covered! You can buy the new Vulkan shirt (and other stuff too) in our Developer Store online.

Most of the biggest players in 3D Graphics and Gaming are Khronos members, and many of them are having sessions at GDC that are about or pertain to Khronos technologies. Here are some sessions you may be interested in.

For the latest up-to-date list of Vulkan, OpenCL and OpenGL session, please refer to the official GDC sessions page.

You can find a complete list of GDC Exhibitors here.