Khronos standards are fundamental to many of the technologies on display at SIGGRAPH. Look for the examples of the latest updates to many of our standards in many of our members’ and partners’ booths and technical sessions, and attend one of our BOF sessions for the latest.

Thank you to our Sponsors!

Thank you to our Khronos-member sponsors NVIDIA, LunarG, Cesium and AMD for helping to make our networking reception possible:

Location: Diamond Ballroom 7-10, JW Marriott LA Live, Los Angeles California. You do NOT need a pass to attend our BOFs.

Our BOF Day of individual BOF sessions covering the Khronos standards below will be on Wednesday, July 31 in the Diamond Ballroom 7-10 at the JW Marriott LA Live, in Los Angeles California. Bookmark this page and check back, or subscribe to our newsletter to get a session list in your inbox.

If you are unable to attend our BOF Day, you can still watch our livestreams:

Rapid-fire overview of all things Khronos.

The latest news on the glTF tools ecosystem, extensions, and specification. Developers and artists can learn what's new in glTF, the efficient API-neutral 3D format with PBR materials. Presentations for some of the below sessions can be found here.

Come see the latest techniques for deploying GPU-accelerated 3D content to the World Wide Web via HTML5 and WebGL. Meet the community and ask your pressing questions! Presentations for some of the below sessions can be found here.

Standardizing All the Realities: A Look at OpenXR - 1pm

An update on OpenXR, including the application and device interfaces and interoperability between different hardware. Epic Games, Microsoft and Varjo will demonstrate cross-platform XR applications within the same OpenXR API, showing how the standard helps to reduce industry fragmentation.

Join us after a day of BOFs at the Khronos networking reception, sponsored by our members. Have a beer or two, talk with Khronos presenters, see demos, and network with fellow developers. The speakers from many of the Khronos BOF sessions will be in attendance and will be ready to answer your questions or just say "Hi!"

Get your Khronos T-Shirts!

Flaunt your standards-allegiance this summer with a fashionable Khronos t-shirt available online. Most designs come in all sizes for both men and women. Got a Khronos shirt already? Old or new. Wear it, take a pic, and post it on Twitter with hashtags #khronosbof #siggraph2019. 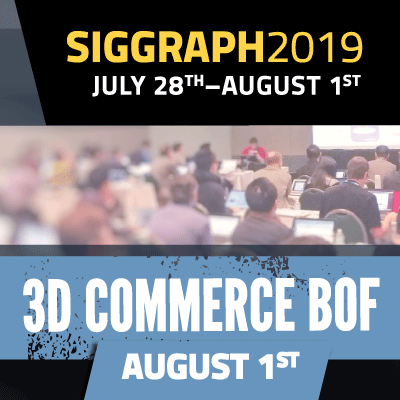 Moving "3D in Commerce" Forward with Khronos: A Call for Participation - 10am

3D is a powerful merchandising medium poised to become ubiquitous in retail; however, real-time 3D content cannot be experienced consistently across platforms and devices. Consequently, production and consumption of 3D virtual products is currently unscalable, siloed and expensive. Learn how Khronos is bringing the industry together to align on standards and guidelines that will make experiencing 3D virtual products consistent no matter where and how they are viewed. Come hear about the latest developments inside the Khronos 3D Commerce Group and how you can get involved to move the 3D industry forward.