Difference between revisions of "Refinery on Mac OS X"

For the OS X version of the COLLADA Refinery, you will find an Xcode project file to build an application bundle and an external framework. This allows you to have access to the bundled conditioners and even to easily create your own conditioner plug-ins.

Go here for build instructions on the OS X ColladaDom-Framework

Early Tiger versions need to update to Release 5. You can update either via Apple's Software Update, or download the package from here.

Building the default target performs all necessary build stages to bundle the Refinery tool. Those are:

Note that, when using the Release configuration, all builds are Universal Binary for PPC and Intel architecture.

The Java frame in a Mac-fashioned App-Bundle. Already includes the default conditioners that are shipped with the Refinery.

Interface to import conditioner plug-ins that allows users to create their own conditioners. Each conditioner has to link against this library.

In this location you will find preferences.xml, the Refinery configuration file, and two subdirs:

As a starting point, you can use this example project. You will find an already set up Xcode project file in

Until the Mac OS X version is available in SVN only, you can download precompiled binaries from here: 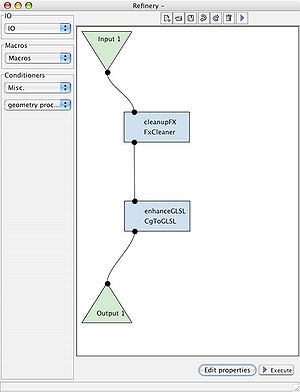 Refinery on Mac OS X
Retrieved from "http://www.khronos.org/collada/wiki_collada/index.php?title=Refinery_on_Mac_OS_X&oldid=4716"
This article is in categories: