…was the Android Central headline for its recent article about our GDC presence and the many announcements we made there. We couldn’t have said it better ourselves. For The Khronos Group and its members, GDC was filled with lots of new contacts, enthusiasm and inspiration for our flagship standards and excitement over the new API initiatives. We want to thank all of our members, partners, developers, and friends for your participation and feedback at GDC. Below is a quick recap from our presence and a sneak peek into what’s next for The Khronos Group.

New for us this year, we participated in VRDC, which was an engaging event that put us in front of a lot of partners and potential new members and gave our members a chance to network as well. We also had over 1,000 attendees at our 3D Graphics Developer Day with people returning to attend sessions such as “Vulkan Game Development on Mobile,” “VR Innovation – Standards for API development,” and “When Vulkan was One: Looking Back, Looking Ahead.” Lastly, our booth at GDC was wildly busy, with talks around the clock. In case you missed any of our GDC talks, videos, presentations, and photos are available on our website.

It’s exciting to see the continuously-growing momentum for Vulkan from game studios, GPU companies, and platforms. GDC marked the one-year anniversary of Vulkan, and Khronos released new VR extensions. See what PC Perspective had to say about it. 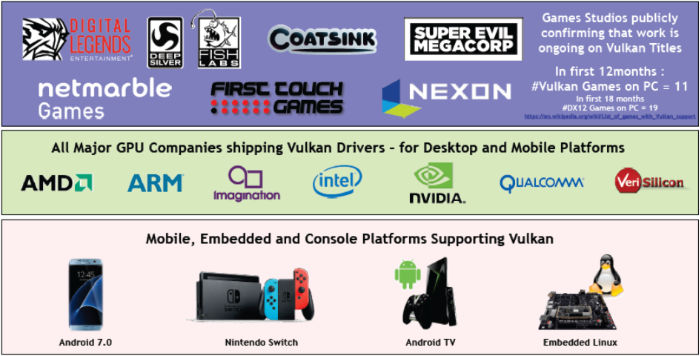 OpenXR is the Talk of the Town

We also announced a name for our VR Initiative at GDC, which got a lot of buzz from the industry. OpenXR is aimed at solving the VR and AR fragmentation issue and the working group is now setting its sights on the goal of publishing the API in the next 12 to 18 months. We spoke to UploadVR about our goal to continue to get important VR players involved. They had this to say, “Vulkan is a testament to the benefits of a standard and they’re looking for more companies to jump on board for OpenXR as they’ve moved beyond the exploratory phase and are now developing the actual standard. Samsung, Oculus, Valve, and a great many others are on board and it is likely many more will jump on board now that there’s a finish line in sight that mutually benefits the industry collectively.”

The OpenXR working group is now meeting regularly to define a standard for portable VR and AR applications and devices; if you’re interested in joining Khronos to participate, find more information here.

We also announced WebGL 2.0 is now rolling out into production Chrome and Firefox - bringing advanced, desktop 3D graphics capabilities to browsers everywhere.  We also announced that design work has started on WebGL Next — the next generation of the WebGL specification to bring the performance and power of new low-level graphics APIs such as Vulkan to the Web.

Lastly, we created a new 3D portability exploratory group to discuss and formulate a solution to enable 3D applications that are portable across Vulkan, DX12 and Metal-based platforms. If you are interested in participating, please consider joining Khronos for a voice and a vote in these discussions.

Another impactful announcement that took place at GDC — Microsoft joined the already-impressive list of companies who have publicly stated support for the glTF file format for runtime 3D asset delivery in their range of products. In the spirit of open development, we’re looking for feedback from developers now on our preview of glTF 2.0 before it is finalized, feedback is being collected on our GitHub page.

We are looking forward to everything that 2017 has to bring and GDC was the perfect setting for us to kick things off with strong momentum. We can’t do any of them without our incredible members. Thank you to everyone who supports us!