Bringing 25 graphics standards to various industries is a collaborative effort, run worldwide across Khronos’ over 100 member companies. We come together three times each year for face-to-face meetings, which present the rare opportunity for all of our active members, Working Groups, and personnel to discuss the goals for the upcoming year to drive our standards forward. These events also present the opportunity to give Khronie Awards to those whose contributions made significant impact to Khronos, our standards, and our mission.

The awards are given to active working group participants who have made a significant contribution, whether to Khronos as a whole or to a particular standard, for a long-term accomplishment or a singular act, nominated by officers of respective Working Groups (though any active member of Khronos can nominate a fellow member for their worthy contributions). 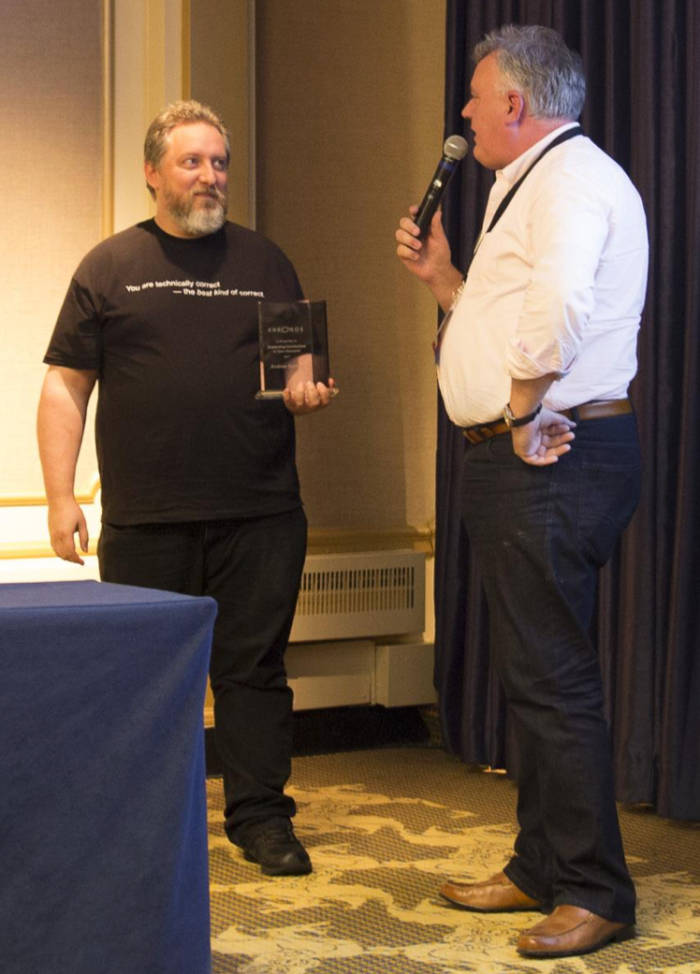 At our most recent face-to-face in Chicago in September, Khronos was pleased to recognize our newest Khronie Award recipients: Andrew Garrard and Piers Daniell!

Andrew participates in the Vulkan Working Group, hailing from the Samsung R&D Institute UK. He was nominated to win a Khronie for his work of the Vulkan Data Format 1.2 spec — he took on the development on his own, a long and difficult process that made a huge stride for Vulkan. The standard is relatively new, having been launched in February 2016, and Data Format 1.2 was just updated in September 2017. Andrew’s work on the new Data Format was recognized as a contributing factor to its success with this Khronie Award.

Piers Daniell is a principal software engineer from NVIDIA. He’s been with Khronos for almost a decade, having joined in 2008; he took on our oldest standard as the Working Group Chair for OpenGL. Piers was selected to receive a Khronie after the release of OpenGL 4.6, where he updated the working group processes. Piers’ leadership in the group was key in moving the new iteration forward. 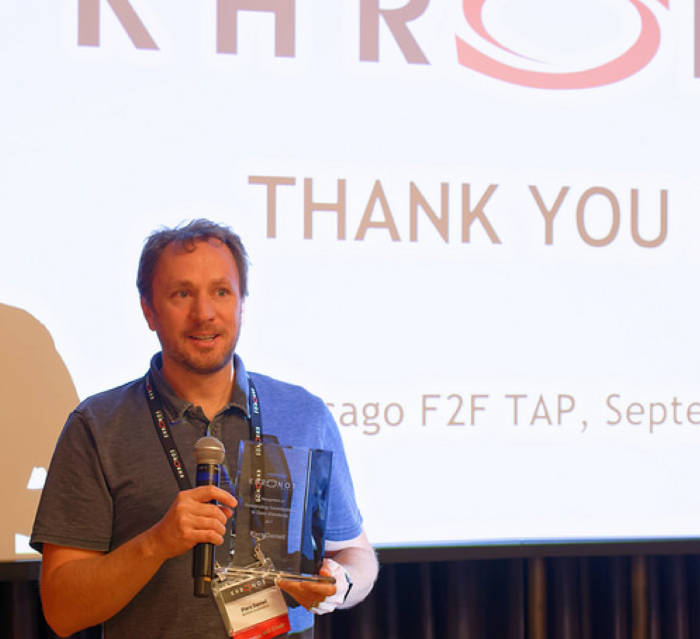 Piers and Andrew join the ranks of many Khronie recipients. In the past year, we’ve recognized 12 of our active participants at face-to-face meetings:

The Khronie awards have been given for over a decade, having been started a few years after Khronos was established in 2000. Browse the full list of recipients dating back to 2006 here: https://www.khronos.org/about/khronie-awards